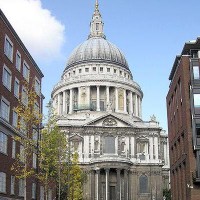 One of the longest ever one off spring cleaning projects has finally finished, as St Paul's Cathedral has been restored to its former glory.

Scaffolding was first erected around the famous London landmark in 1996, as cleaners worked to rid the building of decades worth of grime.

Now, for the first time in 15 years, tourists and residents will be able to see the construction in its entirety without the metal platforms infront of it.

The £40 million renovation saw firms offering high-tech spring cleaning services scrub away at both the interior and exterior.

On the outside, 150,000 individual blocks of white Portland stone have been spruced up.

The man who led the project, Martin Stancliffe, said: "This great building is now in a sound state and probably looks better than at any time since its completion in 1711."

It is a fitting time for the restoration work to be completed, as the great cathedral will celebrate its 300th anniversary on June 21st 2011.

To mark the occasion, the people in charge of the building have launched a photography competition, which encourages people to submit their best shots of the cathedral.